NISA has not released any new update today, JAIF has released one more update since this morning. I won't paste updated tables this time, but they can be seen in the link provided. There is no major changes to any reactor. Both number 2 and number 3 reactors are now getting their freshwater pumped with temporary electric pumps that have replaced the fire pumps used up untill now. In their latest written report they say that they have found highly contaminated water in a tunnel with pipes and cables connected to the turbine hall, the activity level is similar to the water found in the turbine hall basement and they are investigating the source of the water. They continue to se high levels of, among other things, I-131 in the seawater and suspect it is due to the contamination in the tunnel.

Kyodo reports that plutonium has been found in the soil outside the reactors.  The source of the plutonium is unknown and the level is comparable to what was found in japan after the nuclear tests done by Russia and the US during the cold war. TEPCO has provided a report that gives the concentration as about 1 Bq/kg of soil of Pu-239 and less than 0.5 Bq/kg of soil of Pu-238. The levels are very low and one could practically eat tons of soil before ingesting getting a dangerous amount. There is 0.44 billionths of a gram of Pu-239 per kg of soil*, a lethal dose of plutonium-239 is half a gram. So one would have to eat more than one million metric tons of soil to get a lethal dose of the plutonium contained within the soil. That is how low the amount is (that also gives a good example how exceptionally low concentrations of radioactive materials can be detected).

NHK reports that the 3 exposed workers have been sent home and that they don't show any symptoms of radiation sickness.

It seems like the number 2 reactor is leaking quite significant amounts of radioactive water. It's not clear if it is coming through a breach in the containment or if it is through some of the pipes. If for instance the valves, closing the reactor from the pipes that are coming in through the containment, is leaking. The highly radioactive water is a big problem since it prevents access to the turbine halls and delays work to restore the reactors internal coolant pumps. They have found similar build ups of radioactive water in the number 1 and 3 reactors turbine halls, but not as strongly radioactive. Since it is a problem in all three reactors to some extent my bet would be that it is the valves that are leaking.

JAIF has released their update but not NISA. I will wait to write down the status of the reactors until the NISA update arrives and for now I just paste JAIF's tabels.

Kyodo reports that TEPCO measured the radionuclide content of the water in the turbine halls wrongly, they overestimated it by a factor of a hundred. Confirming our suspicion that they are measuring wrong. Kyodo also reports that the Nuclear Safety Comission states that there has been a partial meltdown in the number 2 reactor. I am a bit surprised by this statement because it has been quite clear since the first few days that there has been a partial meltdown.

The workers that where exposed to radiation while working in the turbine hall basement have left the hospital and are reportedly in perfect health.

According to TEPCO's latest update they have switched the cooling of the number 2 reactor from the fire pumps to temporary electric pumps.

Reuters report that the levels of radioactive material in the sea outside the plant is dropping. 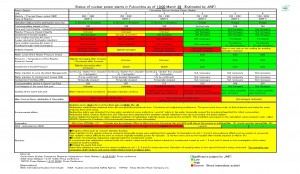 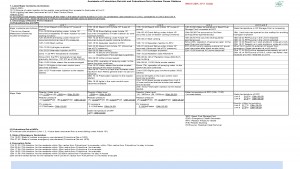 Last reply was March 31, 2011
Nuclear Power? Yes Please is a place for friends of nuclear power to network and exchange useful information about happenings, knowledge and research in the nuclear world. Here you can also download the Smiling Atom.