It seems like TEPCO has realized it will take some time for them to restore the internal circulation pumps in reactor 1-3. The equipment has been drenched in salt water for some time now and the highly radioactive water in the turbine halls makes it very hard to do any kind of work. The normal cooling works by having water circulating through the core, then going through a heat exchanger that transfers heat from the water to an outer circulation loop that transports the heat to some kind of heat sink (in this case the ocean). The form of cooling that TEPCO has been doing since this accident started is to simply pump water into the cores, where it boils and creates steam that they then blow down into the wetwell. This means water is going into the building, but not leaving it. As anyone can realize that can't go on forever until water comes out somewhere because the wetwell and containment doesn't have infinite volume to store water. All the crap water that has been leaking into the sea is a result of this cooling method.

Since they have to try to prevent more leakage into the sea and they can't get the internal cooling working TEPCO was left with the choice to build a new closed loop with new heat exchangers. All one really need is a pipe where one can put water into the reactor and another pipe where one can take the water out. Connect that to a heat exchanged and voila you have new circulation cooling without any need to fill the wetwell with steam. That is exactly what TEPCO is going to do.

That isn't a solution without problems though. The reactor circulating through the core will become very radioactive due to the partially melted fuel, so any pumps and pipes used will be dangerous to approach. Everything has to be set up in such a way that once started it will run quite reliably, because repairing things won't be easy. It would also be quite dirty if the pipes or pumps starts leaking so they better make them tight.  Still it seems like a better and more long term solution than what they doing right now and it seems to be necessary in order to get rid of the radioactive water in the turbine halls, in order to get access to the real pumps and restore/replace them. Right now water is leaking out as quickly as they can pump it away.

The above strategy is a part of a bigger plan to stabilize all the reactors, stop all leakage of radioactive material and put all 3 reactors into cold shutdown. TEPCO estimates it will take 6-9 months before its all finished. Among other things TEPCO will build up storage and processing facilities for the radioactive water, build covers over the damaged reactor buildings , somehow repair the breach in the number 2 wetwell (one article mentioned "sticky concrete") and inject nitrogen into all the containments.  Atomic Power Review has a nice short list.

It is positive that TEPCO seems to have a long term plan, lets hope they will be able to proceed with all the steps without to many unexpected problems.

TEPCO has driven around inside the reactor buildings with a robot equipped with radiation detectors and the dose rates within the buildings are around 50 mSv/hour. A worker could only work there for 5 hours before they exceed the maximum allowed dose limit. I wonder how they plan to deal with that and I also wonder how they have measured it.

The status of the reactors are fairly unchanged. Temperature going down in the number one reactor.

Dose rates are also reported specifically for the Eastern part of the Fukushima prefecture, for distances beyond 30 km from Fukushima-Daiichi. On 16th April, the values in this area ranged from 0.1 to 25 µSv/h.

The areas with a ground contamination of more than 1 MBq/m^2 of Cs-137 sounds quite limited, seems like there are some hot spots west of Fukushima. From IAEA:

On 15th and 16th April, the IAEA Team made measurements at 44 different locations in the Fukushima area at distances ranging from 20 to 58 km, West from the Fukushima nuclear power plant. At these locations, the dose rates ranged from 0.6 to 37 µSv/h. At the same locations, results of beta-gamma contamination measurements ranged from 0.03 to 2.8 Megabecquerel/m2. The highest values were observed at distances of less than 30 km from the power plant.

I hope someone will soon release maps of ground contamination so one can get a sense for how much land will be unusable. 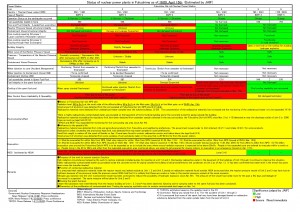 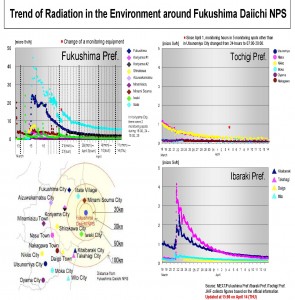 Last reply was April 20, 2011
Nuclear Power? Yes Please is a place for friends of nuclear power to network and exchange useful information about happenings, knowledge and research in the nuclear world. Here you can also download the Smiling Atom.