An old news article is circulating around that states that 68 tons of fuel has melted in reactor number 1 and that it was close to breaching the bottom of the containment. The article is several months old but for some reason I have seen it pop up again on facebook so I though it is worth examining the article briefly. In particular I want to examine this statement.

Only 37 centimeters of concrete remains between the fuel and the vessel's outermost steel wall in the most damaged area, TEPCO said.

This wording is repeatedly used by anti nuclear sources to imply that a much worse disaster was very close to happening. What the articles fail to mention however is that there is A LOT more concrete between the ground and the molten core. The reactor building itself is a very thick concrete structure. Will Davis, on his excellent blog Atomic Power Review, talked about this the first time the news about the number one vessel failure showed up last November. Some of what he wrote is worth repeating and I hope he doesn't mind me repeating it here and also posting a picture from his blog.

The NHK report indicates a melt depth of about 2.1 feet(64 cm, my note /Johan). The distance to the ground is roughly eighteen times this depth from the dry well interior floor to grade. Below is a drawing from WASH-1082 which I've marked to show the distance from the dry well floor to the grade outside, which on the particular plant shown is 39' 0"(11.8 meters, my note /Johan). I do not presently know the exact measurement at Fukushima Daiichi No. 1 but it is likely within ten percent of this measurement... meaning that in the worst case that TEPCO is describing, by its own data, the core material may have melted only about as much as 5% of the distance to the grade.

I encourage everyone to read the rest of his blog as it is by far the best information source for the Fukushima accident. 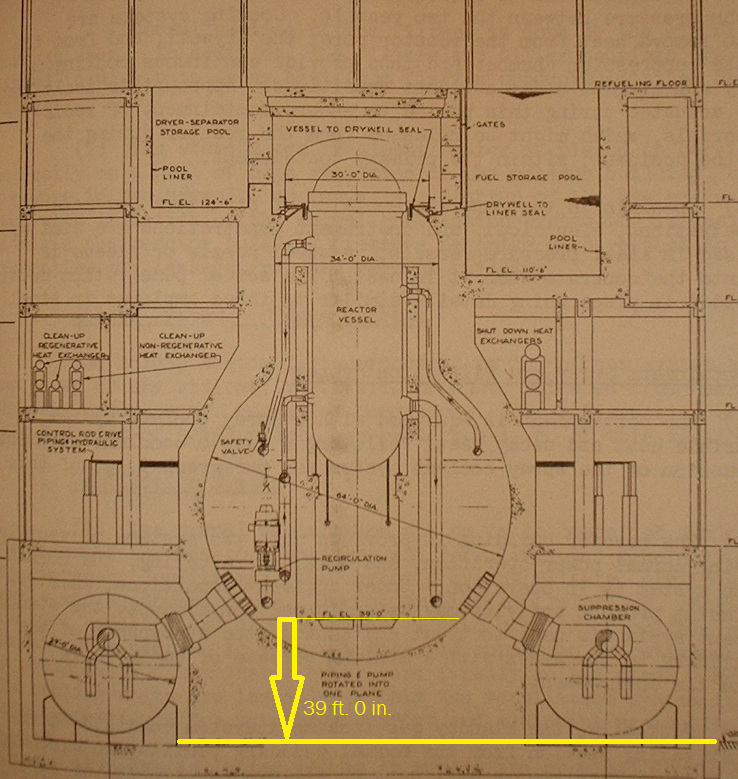 I also want to add this picture of the mark I containment that schematically shows the thick concrete even more clearly! Picture found at the blog "The capacity factor". 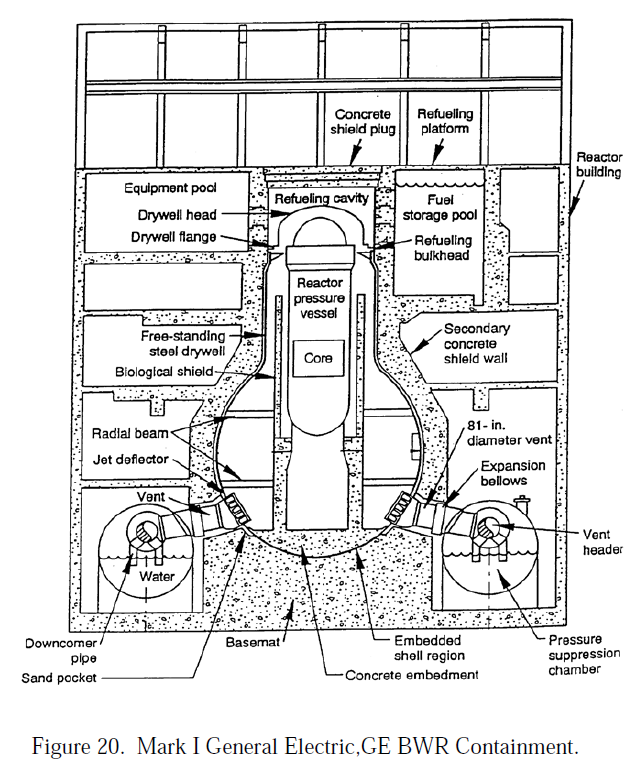 So we see that there is a tremendous amount of concrete below the shell of the containment structure. The hints and suggestions that the core would only have to melt another 37 centimeters for a unnamed disaster to take place is obviously false. In reality the shell of the containment is integrated into a thick concrete structure and the molten core would have to melt through several more meters, likely around 10 meters, to get out of the reactor building itself.

The cleanup of the containment is going to be a very hard and messy job, much worse than the cleanup of TMI was. But the core is still a long long way from the ground.