Tepco has released more information about their plan to stabilize the Fukushima reactors(link 1, link 2). Their table of measures to be taken is hard to read, but the schematic of the plan is quite enlightening and i have attached it below. 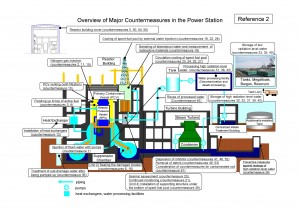 They are basically facing 4 problems, ensuring long term cooling of the cores,  ensure cooling of the spent fuel pools, prevent release of radioactive material and mitigate the consequences of the releases that will continue for a while. I want to speak a bit more about cooling in this blog post since it is the most crucial problem.

As I have written before (and I will repeat it again, bear with me), the most important thing is to get circulation cooling going again. The current way of cooling the reactor, by pumping in water, letting it boil and then venting the steam out into the containment, is not a long term solution since one is continuously adding water to the system. The volume of the containments are large, but not infinite.  One can’t put more and more water in there without it sooner or later coming out out somewhere, somehow. We are seeing that in the large leakage from the number 2 reactor. Cooling by circulation simply means one pushes water into the core somewhere and take it out somewhere else. The water taken out is then run through a heat exchanger that cools the water by dumping the heat into a heat sink (the ocean). There are a bunch of different cooling systems in a reactor.

During normal operation of a BWR(boiling water reactor), heat is carried by steam from the core, the steam passes through a turbine that generates electricity and then the seam goes through a condenser that cools it into a liquid state again, before its pumped back into the core. The condenser in turn is connected to water flow from the sea, a river or some other big body of water that keeps the condenser cool so it is able to condense the steam. 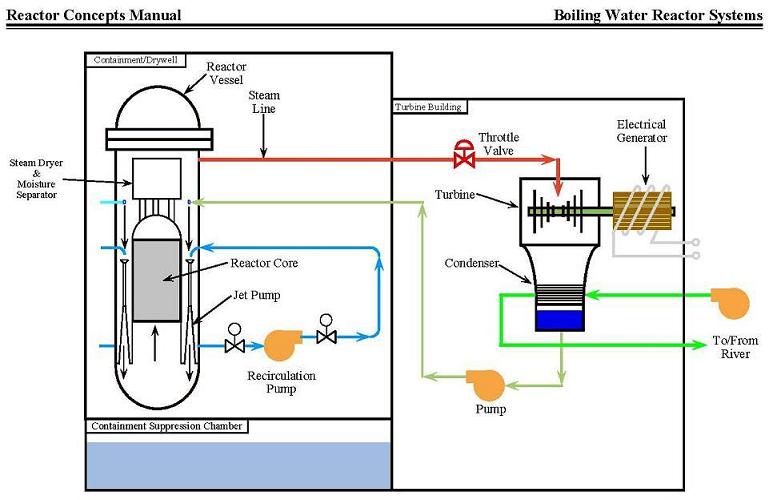 When the reactor is shut down there is still decay heat that needs to be removed. One does not want to produce steam during shutdown so the normal cooling by letting steam go through the main steam line out to the condenser is not an option. All BWR’s has recirculation pumps that takes some of the core water and recirculates it within the vessel, during normal operation this is done to control the steam level in the core. Connected to this recirculation loop is pumps and pipes that can lead water to a heat exchanger that dumps heat to some heat sink before it is circulated back. This system is used to provide cooling during shutdown and is called the Residual Heat Removal (RHR) system. It’s capable of getting rid of the decay heat (heat that continues to be produced from decay of fission products, long after the fission chain reaction is shut down) and keeping the water in the reactor at below 100 degrees Celsius. 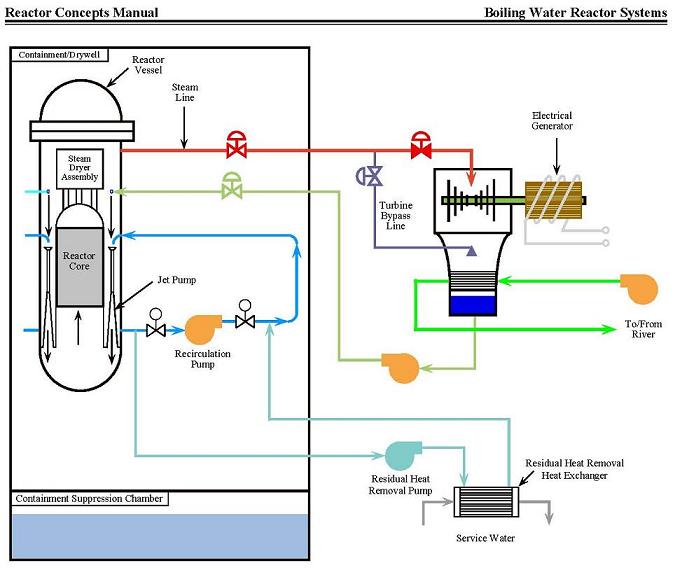 The above two options both require electricity do drive pumps, both for the internal circulation but also to get seawater to the heat exchangers that cool the water in the internal circuit. If for some reason pumping power is lost there is a system that kicks in and can run for a short time period (hours). The system is called the Reactor Core Isolation Cooling (RCIC) system. It works by using a temporary heat sink. All BWR has something called a “wetwell”, the wetwell is a water filled volume within the primary containment below the reactor pressure vessel (that contains the core). In an emergency one can shut the main steam outlet and the main feedwater inlet to isolate the containment from the sounding environment. The steam generated in the core is instead diverted into a small turbine that drives a pump that pumps water into the core from the wetwell or from a water storage tank. After passing through the turbine the steam is dumped down into the water in the wetwell. When mixing with the water the steam will condensed and can be pumped back into the core, at the cost of heating up the wetwell water. When the wetwell water gets close to boiling point it can no longer absorb any heat and it  stops acting as a heat sink. When that happens no more water gets returned to the reactor and water level starts to drop in the core. Usually it can absorb a couple of hours worth of decay heat. This system was the system that was cooling all the Fukushima reactors for the first hours after the accident. It is almost a passive system, it doesn’t require any large amounts of electricity but it do require some small power from batteries for control. 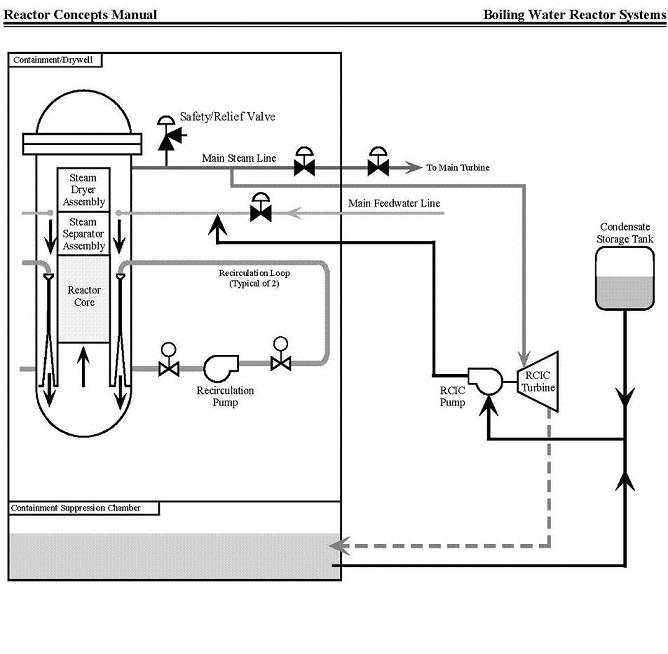 The trouble in Fukushima started after the RCIC shut down. There was no power to start up the RHR and water level started to drop causing the fuel in the core to be damaged and release radioactive material into the water in the core. As a emergency move TEPCO then started to inject water into the core to cover the fuel again, without having anywhere to dump the steam getting produced. They have been doing that during all the time so far. The hope was that they would be able to restart the RHR system after recovering power to the reactor. But the tsunami drenched all the switchboards for the control room and also flooded the turbine hall basement where apparently a lot of the equipment related to the RHR is located. Leaks from the core afterwards contaminated this water so much that workers can not get to the equipment to restore the RHR.

The dilemma for TEPCO is that they can’t repair the equipment for the RHR as long as the cores are leaking radioactive water, but the cores will continue to leak as long as TEPCO continues to inject water into the cores without having restored the RHR circulation. So what can they do in a situation like this? They have desperately been trying to find some way to pump out enough water to be able to start repairs, but to no good. Even if they could it is doubtful the repairs can be made quickly, likely the entire system is completely trashed after having been drenched with salt water for weeks. That leaves TEPCO with only one option, create a new RHR loop.

What they are planning to do as far as I can tell is to install a bunch of heat exchangers somewhere with access to seawater. Then they will pump water out of the reactors, through the heat exchangers and then back in. Just like the RHR would do. The difference is that they are going to have to pump the water in pipes straight out of the containment and reactor building. One would normally never do such a thing since the risk of a leakage is not trivial and due to the radioactivity of the water, once they start pumping, no one will be able to be close to the pumps or pipes. It would not be very pleasant for instance if a new earthquake where to rip the pipes apart while they are pumping, but the option of not doing anything isn’t really an option at all and if they can get that cooling working then they could more briskly get to work on restoring the real RHR system.

What confuses me at this point is where they will connect the new temporary system. First they where talking about connecting it to the feedwater line and some kind of fire extinguishing system, both connecting to the reactor vessel. That would be ideal since it would prevent crap from getting out of the core and into the containment, which is the main problem, since the containment on the number 2 reactor is leaking and causing the big problem in the turbine hall basement. But now, from the plan I posted above, they indicate will instead flood the containment and connect one end of the temporary RHR to it while the other end goes into the core. They will in other words circulate water:

From core -> into containment -> out of the containment through a heat exchanger -> then back into the core.

I don’t see how this solves anything since it is the amount of water present in the containment that seems to be causing the leakage problem in the first place! But I guess their plane will become more clear in the future.

As for other news. There is nothing new about the status of the reactors as can be seen from the pictures below, temperatures in all three reactors continue to go down. Pressure in number one reactor seems to have stabilized a bit and the declining trend in radiation levels around Fukushima continues. 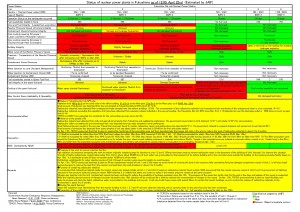 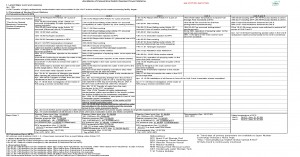 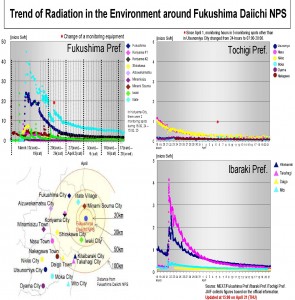 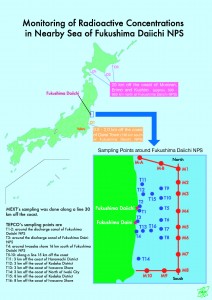 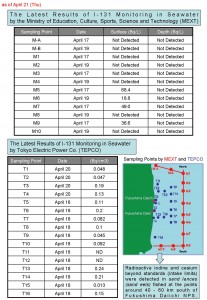 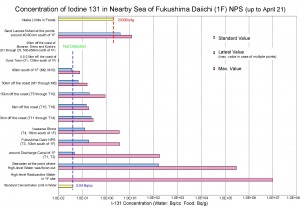