Professor Chris Busby is a man that has made himself somewhat of a career in being the golden boy of nuclear opponents, saying just the things they want/need to hear. There is only one problem with this: he doesn’t have a foot to stand on when it comes to his tall tales about the evils of nuclear power. Previously we have exposed his claims that the Chernobyl disaster supposedly caused an increase in breast cancer in Sweden. This turned out to be an unfounded conclusion, based on frivolous interpretation of data along with some outright cherry-picking and willful suppression of data that didn’t fit the claim.

In the case of The Tall Tale Of Ten Tons Uranium Gone Missing, Busby and his colleague Cecily Collingridge have issued a report where they claim that there has been a leak of enriched uranium from the British nuclear power plants at Hinkley Point in the order of about 10 000 kg. We analyzed the data which he used to make his claim, and took the same steps as he did, following his chain of reasoning from data to conclusion. The result is hardly flattering for the Busby and Collingridge, because the claims they make hinge on…

– Graph fitting done on this data, while ingoring uncertainties 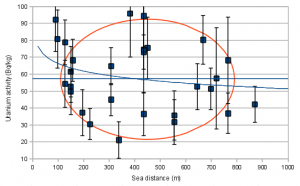 The full analysis can be found in our forum. But I’ll just cut right to the chase and ask the obvious question: how would 10 tonnes(!) of uranium go missing without anyone noticing? And more important: why didn’t anything else go missing? The data that Busby uses to make his claim shows barely detectable levels of fission products, such as Cobalt-60 or Cesium-137. Considering that uranium is a lot less mobile than these products, if uranium goes missing but not the fission products, there cannot be a leak in the reactors because any such leak would have seen more fission products escape than uranium.

This begs a final question: claims have been made that there are numerous health problems around Hinkley Point, such as an increased incidence of childhood leukaemia. If there are no leaks from Hinkley Point, how would this be explained? Well… to find that answer, maybe you should go ask the one person making the claims: a certain professor Chris Busby.