23 days after the tsunami

This video from CNN shows the pit that is leaking into the ocean.

We did not make any status update yesterday because the situation is not evolving very rapidly anymore. We might perhaps switch to updating less frequently depending on how the situation continues to evolve.

JAIF has released a update (data from 13:30 JST today) and NISA has an update from yesterday(06:00 JST). So there is more than one day between the values, first one from JAIF and the value within () from NISA.

Temperature and pressure in reactor number one core continues to be quite high but containment pressure is well within design margins. Nothing really new with the status of the reactors.

One leak path of radioactive water into the ocean has been identified. It is some kind of pit for cables reportedly close to the sea water inlet for the number 2 reactor. Below is a sketch TEPCO provides. 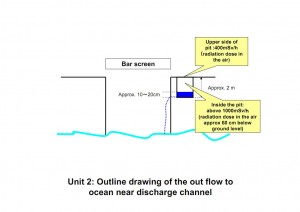 They have tried both filling the pit with concrete and also filling it with a water absorbing polymer normally used for diapers. The concrete reportedly did not work and no success due to the polymer injection has yet been reported. They are also adding newspaper and sawdust into the tunnel connecting to the pit. All of this is of course temporary measures until one can identify where the leak originates. Whether it is due to the failure of the wetwell reported earlier, or if the valves that are supposed to close the main feedwater lines into the core during an emergency is leaking water into the pipes connecting the reactor to the turbine. Plugging up the pit would at most just slow down the release of radioactive material until the main leak in the containment is fixed. That might end up being exceptionally hard due to the radiation levels. One can’t really weld a leaking crack in the torus with 1 gray per hour dose rates.

TEPCO is planning to use a large barge in order to get rid of the contaminated water found in the turbine buildings along with pumping it into the surge tanks for the suppression pools. Below is a chart on how they are planning to do it. 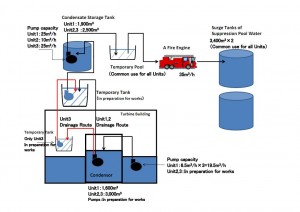 It is frustrating to have no idea on what their long term plan is. If the summary of the damage done to the reactors by Murray Miles(written on Rod Adams blog) is correct then it will be exceptionally hard to revive the control rooms. Here is a quote from the explanation:

In going the extra mile to protect from earthquakes, Tokyo Electric put the electrical switchgear in the basement. So they had electrical power after the quake. However the tsunami flooded the basements, and there was no way to pump out the basement. The water obviously shorted out the circuits.

To compound the problem, they routed the wiring for the instruments in the control room through this basement switchgear. Therefore after the flooding, all six plants were without power, without emergency diesel generators, without instrument readings to tell the status of the plants, without lights. I have not seen these two disastrous design failures discussed on television.

We might be looking at months of work to reroute all the cables connecting the instruments and equipment within the cores to the control rooms. I don’t know the minimum amount of equipment and instruments that are needed to put the reactors into cold shutdown, but lets hope its not to much. Until they get internal circulation working within the reactors they will have a problem with leakage from the reactors since they are doing a feed and bleed strategy now. I.e they feed the reactors with water that boil and then bleed the steam out into the containments. The containments of course are not infinite in volume so it is not a viable long term strategy, especially not in the number 2 reactor that has a leaking containment.

It would be very reassuring if TEPCO and NISA could present an outline of what their plan is regarding getting back the minimum needed instrumentation and equipment and what measures have to be done to achieve that and if there is any option in case they can not remove the contamination from the turbine hall basement sufficiently to work there.

Checkup on the thyroids of children in the surrounding areas have shown the kids have not been exposed to I-131 over the limits. This is very good news considering that it was I-131 that was responsible for all extra cases of cancer so far detected after the Chernobyl disaster. Radiation levels in the surrounding seems to be on a stable downward trends and all the radioactive materials coming out of the reactors now are leaking into the ocean rather than being dispersed into the atmosphere. It is likely that will continue unless the need for more containment venting appears again.

The two workers that was reported missing after the tsunami hit has been found dead in a turbine building, very sad news. 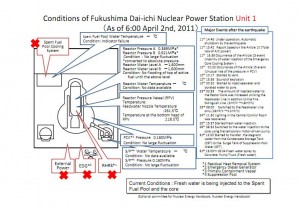 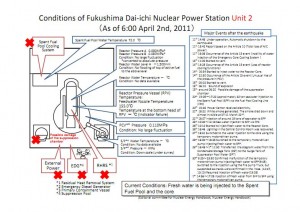 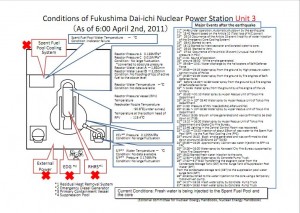 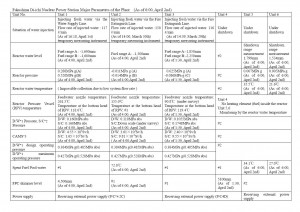 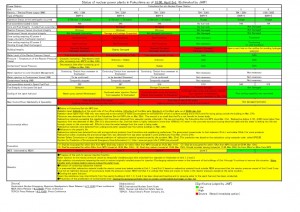 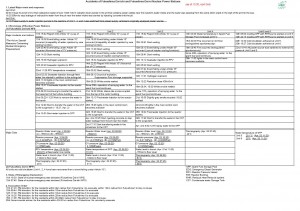