During 2008, and highlighted in articles this past week, there has been statements that the maximum rate of corrosion of copper in pure water may be higher than anticipated. This is important to the nuclear issue because copper is one of the four barriers of the Swedish Nuclear Fuel And Waste Management Company (SKB) method of storing nuclear waste: KBS-3.

Scientists from The Royal Institute of Technology and Uppsala University Peter Szakálos (KTH), Gunnar Hultquist (KTH) and Gunnar Wikmark (UU) are calling into question statements by SKB that copper is immune to corrosion in pure water devoid of oxygen. This statement is found on page 102 in the SKB report TR-06-22.

In the absence of oxygen, copper is thermodynamically immune to corrosion in pure water.

Szakálos, Hultquist and Wikmark claim that in experiments of their own, they have achieved a very high rate of corrosion of copper in pure water if hydrogen is present. The results can be viewed in their Berns presentation from 2008 (in Swedish). 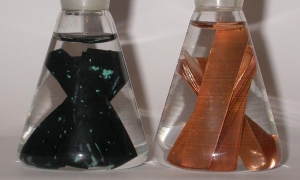 At Nuclear Power Yes Please we are – of course – following the matter closely. Part of the foundation for our confidence in nuclear power is the ability to deal with nuclear waste in a safe manner. KBS-3 is a disposal method, one of many, that holds great promise to live up to our demands on safety and not requiring human supervision. It is currently perhaps even the most promising method considering its technical maturity and political feasibility. So if KBS-3 is called into question, this may in an extreme case force us to re-evaluate our position on nuclear power.

However there is a long way to go before we get there.

Even by the words of Szakálos, Hultquist and Wikmark, this is a solvable issue. As such it does not spell the end of KBS-3, nor does it warrant a major rethinking. Szakálos, Hultquist and Wikmark say that modifications that protect the copper capsules from corrosion in a short term perspective, that is to say 1/100’th or less of the repository’s full life expectancy, should solve the issue since it can only happen when the capsules are hot, that is to say only at the very beginning of the storage period.

We also need to remember that the experiments Szakálos, Hultquist and Wikmark performed to achieve the corrosion were very specific and may perhaps not reflect real life subterranean conditions of a deep geological repository. SKB will need to examine if the conditions stated for the experiment can be expected 500 meters down in the bedrock, or if this sort of thing can only be achieved in a laboratory.

Of relevance to that is the fact that SKB has responded and said that they themselves have not been able to reproduce the results of Szakálos, Hultquist and Wikmark, which in turns calls into question the validity of their statements since reproducibility is perhaps the most important quality of any scientific claim.

SKB is also currently conducting an experiment at their Äspö laboratory where they have buried copper capsules in conditions very similar to what it will be in the real KBS-3 repository. These capsules are scheduled to be retrieved next year, which will give us empirical data on how the capsules are affected once buried. Nothing shows us better what can happen than going out and doing it for real.

In summary: while this issue may force SKB to take one extra think before submitting KBS-3 for final review, this still does not constitute an insurmountable hurdle. So far it appears to be solvable. Even Szakálos, Hultquist and Wikmark state that they do not think this issue is a show-stopper. And as such KBS-3 can only become better from this.

Also, on a very positive note, we at Nuclear Power Yes Please are pleased to notice that this criticism has brought KBS-3 into view of the public eye. This is good(!), because very few people have until now been aware of just how far the work on KBS-3 has progressed. Constantly we are hearing people, especially opponents of nuclear power, saying “We don’t know what to do with the waste”. The issue of copper corrosion has shown everyone that we do in fact have a very good idea what to do with it and that KBS-3 is a well researched method that is approaching the point where when it will be implemented for real.

This issue will of course have to be adressed and at Nuclear Power Yes Please we are eagerly waiting to hear what SKB has to say about it. We will continue to monitor this issue with great interest.

And after all: we are on no big hurry. Nuclear waste is a very patient player and will wait for us in intermediate storage while we take the appropriate time to determine what we will do with it. 🙂